Bhutan is a Himalayan Kingdom nestled between China in the North and India in the South. In the local term Bhutan is otherwise known as Druk Yul meaning Land of the Thunder Dragon and people are known as Drukpas meaning people of Druk Yul. We are 0.7 million approx in population. Bhutan is the youngest democratic country in the world. We had our first general election in 2008. 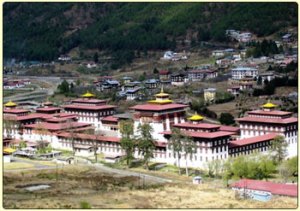 Tashicho Dzong, the site of the Government in the capital city.

Bhutan remained in self imposed isolation for centuries. It wasn’t until the late 1990s that cable TV was introduced. Bhutan is just into it’s fifth decade of development, many people and writers around the globe have written about Bhutan, some of which are distorted facts. 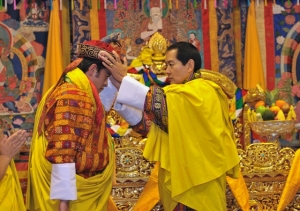 Bhutan is a Constitutional Democratic Monarchy and we love our kings dearly. In the local term our Kings are known as the Druk Gyalpo meaning the Dragon King, a truly deserved title. Our 4th King Jigme Singye Wangchuck abdicated in 2008 in the favour of his son Jigme Kheser Namgyel Wangchuck, which inspired the famous article ‘Bhutan shows British the way’, in one of the Indian newspapers. Gross National Happiness is the vision of our 4th King and is one of the main guiding light in the developmental process. 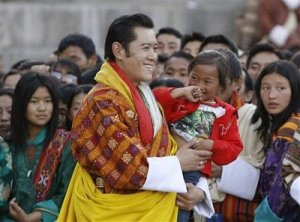 People’s King. Interacting with people after the coronation.

No where in history has a monarch given the rights to the people without the people fighting for it but it has happened in our country. Our Kings handed over the rights of the people, but people were very skeptical about the new form of government.

Bhutan is a place where past meets the present, where people can still lead a simple life. But with the onset of development and mordernisation, a small nation has to pay a price. In last decade drug has found it’s way into Bhutan and death related to drug is escalating and the problem of employment is becoming a concern for every Bhutanese. Youth issue is one of the biggest concern of our Kings.

(This page is being updated, so please bear with us.)

6 thoughts on “My Country”